How to play Poker?

As evident from the viewership of the popular Poker Championship every year, Poker is a fun game to watch, and play. Though Poker for beginners may seem simple enough, there are some elements to it that can only be acquired through practice. Learning to bluff your opponents — to their face in land-based casinos and through a screen in online casinos — and adapting to the game as new cards are turned over are some examples of things that require practice.

So we, at Penn Casino Online, have created a one-stop destination for all things Poker. Scroll down to learn how to play Poker including everything from the basic elements, hand sequences, and rules. 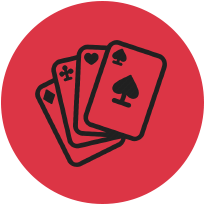 In Poker, the main element is a pot made up of other players’ bets throughout the round. As a player, your objective is to win as much money as possible by capturing the pot. Since the pot is made up of all the players’ money, you’re playing against other players instead of the dealer. You can win a round in Poker either by having the best hand of all your opponents at the end of a round or feigning of having the best hand and convincing your opponents to back out. However, you should also know when to back out of a round that seems impossible to win because money saved is as valuable as money won.

You’ll find that Poker, both in online casinos and land-based ones, can be played by any number of players between two and ten. The game uses a standard 52-card deck and a standard circular or octagonal table.

If you hope to win at Poker, it’s essential that you’re able to identify the winning hands. Here are all the hands in the sequence of highest to lowest value.

A round of Poker begins with all players at the table making an initial contribution called an ante and getting two cards in return. Next, the players have to choose from three decisions through several rounds.

Players have to take these decisions based on their hand value in the Poker hand sequence and one of the most basic Poker rules — put into the pot at least as many chips as the previous player or choose to drop out of the round. This is what makes Poker so fun after all.